At the risk of sounding crazy. At the risk of ruining whatever minimal "reputation" I may have. Most importantly, at the risk of losing money, I have to say this: I think we have Blythe on the run. Big time. My rationale for this is going to be difficult to summarize in writing but here goes. Bear with me...

Today, 2/16/11, was an extraordinary day of FUTFs and FUBMs in the silver pit on the Comex and I'll explain that shortly but it all needs to be placed into context.

If someone wants to purchase physical silver through the Comex, they must first buy a future or option contract for a "delivery" month. The current delivery contract is the March11. Before the close of trading on 2/28, any holders of March contracts must sell their positions or be forced to take delivery. Those unwilling to take delivery typically "roll" their position into the next month, which is May. If an investor does intend to take delivery, that person must, by the close on the 28th, show in their account enough money to pay for their acquisition. A single contract is for 5,000 ounces so, at $30/oz, you must show available funds of $150,000. For 10 contracts, you must have $1.5MM. This is kind of a "put up or shut up" thing. It keeps goofballs from claiming they want delivery when they really can't afford it. On the 28th, you've got to have the dough in your account to "prove" to TPTB that your are serious. Every delivery month, the EE/Comex plays this game and, every month, enough longs simply roll instead of standing for delivery so that the Comex has yet to default on their obligations to deliver the physical silver.

Now, here's the problem...Monday was 2/14. Only 10 trading days to go until the critical 28th. Heading into Monday's trade, there were still 62,692 open contracts for March. This had to really get the attention of the EE and they, without question, went into Monday with a plan to attack silver and scare as many March longs as possible into rolling to May or later. Unfortunately for Blythe, silver began to rally in the wee hours of Monday morning and broke $30 while she was still sleeping. It closed that day above $30.50. But that wasn't the true disaster for the EE. The real shock was when they got the new OI numbers Monday night and found that the March OI had only fallen to 61,720. Panic surely began to set in. Then yesterday, silver traded even higher, briefly touching $30.90. Earlier today, we got the OI numbers basis yesterday and it was an eye-opener. As of last night, there are still 59,851 open March contracts. And first notice day is now only eight days away!!! Blythe had this information before the general public so she knew, going into today, that she had to attack again and she did. Here's your chart: 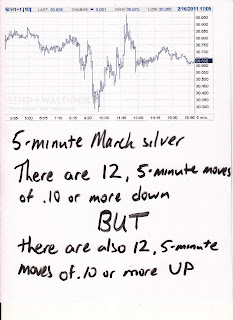 Obviously, it didn't work and that's the problem.

Recall for a moment how the EE caps price. They do so by flooding the Comex with an almost endless amount of unbacked, paper silver. Think about that trade, though. To sell short, you need a buyer on the other side of the trade. And now, at this late hour, how can you reduce the open interest in the March contract if you're only selling new paper shorts to resolute longs who intend to stand for delivery in eight days? By raiding and selling, you're only compounding your problem because you are creating more open interest! If you're Blythe, you're left with only being able to freely sell the forward contracts in an attempt to influence the spot and nearby price. Does this explain the current backwardation? Probably.

To the point, however, what's a girl to do? You can see by looking at the chart above that Blythe tried to raid today but she didn't seem to do it with the usual bluster and gusto. How could she? Every new March contract she sells only adds to her problem. She is truly caught in a catch-22. Again, what's a girl to do?

If the March longs stay resolute, she's screwed. Even if only 20,000 stand for delivery, thats 100,000,000 ounces that the Comex has to deliver. By most estimates, that's their entire inventory. She and The Evil Empire must, somehow, convince/force March contract holders to close their positions but if they can't scare them by crushing price, how do they do it? They could get the CME to raise margin requirements but if you're ready to stand for delivery by putting up 100% of the cost in eight days, a margin increase today is of zero consequence.

So what's left? She can't scare people out through raids and she can't finance people out through margin hikes. She's fucked. She/They will be forced to settle again in cash + premium, just as many suspected they had back in December. However, back then it was just a couple thousand contracts. Now it could be 20,000. Shit, it could be 40,000! And the problem is, word is out. What do you think will happen in May?!? Will 80,000 stand for delivery? 100,000?

So the point is this: Ding dong, The Wicked Witch is hurting. Bad. All the years of Evil Empire domination/manipulation of the PMs appear to be coming to a rapid and spectacular end. Watch the Open Interest numbers very closely. They are your tell.
Buy all dips until and unless the OI situation significantly changes.
Now truly appears to be the moment we've been waiting for. TF
Posted by Turd Ferguson at 6:42 PM

Turd Ferguson
"Turd Ferguson" has been involved in the securites "industry" for over 20 years. He first received his NASD licenses in June of 1990. Ultimately disgruntled by the fraud known as "financial planning", he retired to a career as a serial entrepreneur in 2008. The Turd is NOT a soothsayer, a psychic or a witch. After all these years, he simply has a decent handle on the PM "markets". You can reach The Turd by email at tfmetalsreport@gmail.com. If you are polite and not an AGA, he will probably answer you in short order.